Honestly, I was surprised there were that many dead people in the whole godforsaken state.  I started suspecting they were importing them.  And then Texas arrived…

Shortly after hearing the sounds in the distance, there’s a zipping noise and an apparatus descends from the dark fog on a line.  Brady grabs it and begins having a conversation with someone who is obviously his superior.  The party listens to him give his report, then he asks if anyone knows the whereabouts of Marshall Dent, the party demurs slightly and says they haven’t seen him since they arrived in Abilene.  The conversation continues, and it definitely sounds the like the party is being signed up to assault the fort to slay the Red Lion.  He asks for some ammunition and tobacco, which arrives in a small basket dropped on the same line as the reporting device.

When the conversation is over, Brady says he’ll get air cover to help get them to the interior of the fort, at which point the party would be responsible for slaying the source of the zombie menace.  Some members of the party play somewhat hard to get, but Brady points out that they were prepared to barge into that fort and whip the Red Lion despite his help, at which point they grumble their acceptance and turn in for what sleep they can get before sunrise.

At first light, the party rises, arms themselves, mainly with the water from the consecrated well, and waits at the gate.  With a roar, two single-seat flying machines armed with steam cannons race overhead and mow down the zombies waiting outside the mission.  The party follows the path of destruction to the fort, where the copters are hovering and shooting into the courtyard.  When they run out of ammunition and race off to the south to reload, the party enters the front gates.

The fort interior is coated in carnage, but there are several hundred zombies still standing but they appear completely placid, watching the party.  Eventually, they enter the courtyard, and the zombie eyes (and eye-sockets) follow them to the central building.

Opening the doors to the building, the party is met with a terrible stench and flickering torchlight.  Entering they find a handful of zombies, including several wearing the garb of western fortune-hunters, and on a dais made of oozing tissue, they find The Red Lion. 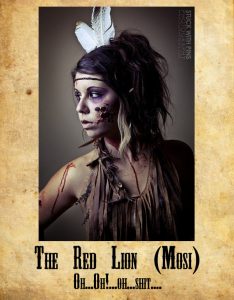 The Red Lion turns out to be Mosi, Ahiga’s kidnapped spouse, the western fortune-hunters her abductors.  She’s obviously dead, and possessed by a demon of unspeakable power.  Ahiga tries to get answers form her, but receives very little before, with a flick of her hand, The Red Lion orders the zombies to attack.

The zombies attack, and The Red Lion teleports into the midst of the party and casually tears Atta’s heart from his chest, killing him instantly.  During the fighting, Holden notes that The Red Lion is wearing a playing card on a string around her neck, a card of the same type and printer that is missing from a deck in his pocket.  He feels strongly drawn to it.

Ahiga raises her bow against The Red Lion….

The rough-hewn wooden walls seem to fall away.  You get the sense of cave walls, stretching out and up into the dark.

The fight rages on, your companions are moving so slowly they appear frozen, but with them, amongst them and the host of zombies, are others.  Swarms and swarms of black, spindly, shadows, like skeletons that move on hands and feet and aren’t constrained by gravity.  Everywhere.

And there are others – standing above O’Connor at the door stands a man fifty feet tall, light radiating from it, massive wings dripping with blood, and when it opens its mouth as it roars in anger, an impossible sound of a million-member choir shatters the air.  The creatures are crawling all over it, biting, clawing.  It sweeps them away by the dozens and shatters them with its light, only to be replaced by more.

There is a man…attached…to Holden.  He’s older, portly with a beard, dressed in a nice suit of clothes.  A collar of green and black smoke wraps his neck and stretches like a chain to Holden’s hand.  He appears…distended…like an over-inflated balloon.  In fact, you see a bit of his arm has a split in it, and black fog leaks out of it and swirls away.  The black creatures completely ignore him.

Then there’s Templeton, or whatever his true name is, standing tall in his rat-man form, robes flaring around him as he bites and claws and slashes at any of the shadows that get close.  He takes note of you in this plane with him before plunging into a crowd of the shadows.

“They made me,” says Mosi, in her small voice, not the voice of the monster, “the Chinaman, Wu, and the other.  They made me.  To stop him.”  She nods at your companions – you’re not sure who she’s referring to.  Perhaps O’Connor?

“You couldn’t have prevented it.  One of us was to be host to the monster and the rest killed.  I guess I was strongest.”  She smiles softly.  It’s an empty smile, with empty eyes.

Templeton stands next to you, picking his teeth with the claw and finger of one of the shadow creatures.

“This is all that’s left of her, girl.  This echo.  This…message in a bottle.  You’ve heard it.  Now it’s time to end it.”  He takes an arrow from your quiver and licks the head with his black tongue before handing it to you.

Ahiga nocks the arrow and shoots The Red Lion, striking her through the throat.  The entire battle goes silent, the zombies fall still.  Ahiga rushes forward and catches Mosi’s body as she falls.  The zombies seem to snap out of their reverie and renew their attacks, but this time with much less aggressiveness and organization.  Ahiga gathers up Mosi’s body, and the party pushes into the doorway only to find the hundreds of zombies assaulting the door.  An ear-splitting horn sounds and out of the fog descends a massive airship flying confederate flags.  Hatches open in its side and dozens of steam cannons emerge and open fire, utterly decimating everything in the courtyard. 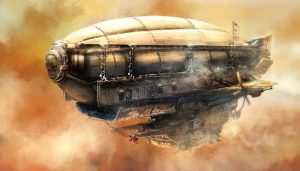 When the firing ceases, the courtyard is an utter slaughterhouse but amazingly, none of the party were struck in the deluge.  Onesimus and Olivia recover Atta’s body, while Seri and Holden gather around Mosi’s with Ahiga.  When Holden notes the playing card, Ahiga assumes that he may have been the one The Red Lion was created to stop.

A gondola descends from the dirigible, containing several armed men and an officer. 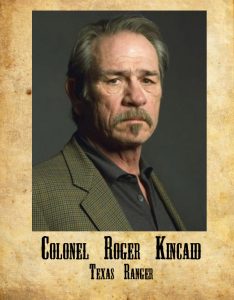 Sims introduces the party to Colonel Roger Kincaid, who shakes hands with everyone who’s willing to, but when he approaches Holden, he leans in and stares into his eyes as if he’s looking for something.  “Do I know you?” he asks.  When Holden replies in the negative, he hesitates for a moment, says, “Huh,” then continues on.

While Kincaid’s men gather kindling to incinerate the fort, the party splits up to bury their dead.  Ahiga keeps the card around Mosi’s neck before burying her.

Kincaid discusses with Onesimus their mutual mission, and Onesimus agrees to go with Kincaid to kill Johnny Wu and then on to Joshua.

Father O’Connor opts to stay behind in Detroit to finish off the zombies and sanctify (or burn down) what’s left of the town.

Seri gives Ahiga a talisman, allowing her to turn into an eagle and soar for a while as the rest of the party boards the gondola to head back to Abilene. 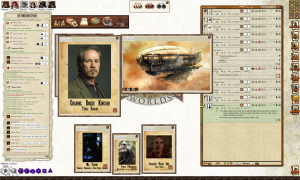