Wu was dead, along with a house full of hired help.  No one but Ed seemed to feel very good about it.  Actually, that’s wrong.  It would seem that someone felt very, very good about it, and had obviously been waiting a very long time to pounce on Abilene.

The party approaches Kincaid as he’s organizing the occupying force.  As they come near, they overhear him ordering Marshall Heller detained and sent up to the Bull Run.  He greets the party warmly and congratulates them for killing Wu.  He sends a runner off to secure the party a place to sleep.

Onesimus intimates that he wants to discuss an alliance with Kincaid in the morning, and Kincaid agrees.

While waiting for the runner, a party approaches dragging Sheriff Dent with them.  He appears to have been abused heavily since being detained.  The two men appear to know each other.

“You killed that little girl in Topeka,” Kincaid accuses.  Dent argues that “it was the monster, not him”.  Kincaid says “that’s what they all say,” before pulling a ghost-rock-powered handgun and shooting Dent, disintegrating him.  Olivia screams in dismay.

The runner returns, and the party is escorted to a hotel where rooms have been secured along with those of Kincaid’s officers.

The party meets in Onesimus’ room to discuss their plans.  Onesimus is convinced the party should appear to ally with Kincaid in order to get the opportunity to dispatch him.  There is some debate as to whether Kincaid is Joshua or not.  Seri and Ahiga decide to leave town in the night, with Seri providing totems to allow the party to flit away as small animals.  Ahiga goes room to room convincing members of the party to leave.

While discussing with Holden, a shapechanger races across the rooftops in a number of different forms before becoming a native man wearing the same war paint as those who have been pursuing Holden who crashes through the window, grabs Holden, and teleports across several rooftops.

The party gathers in pursuit, using Seri’s totem to turn to hummingbirds and give pursuit.  Onesimus stays behind.

The party tracks the kidnapper, who meets up with a larger party and head out of town to the north, following the road between Abilene and the stockyards.  The party pursues into the dawn light.

Onesimus remains behind in his room, and is woken by Brady Sims, who says that he needs to get out of town because Kincaid has ordered the party to be killed.  Onesimus asks Brady some pointed questions about his history with the Colonel.  He learns that Brady was assigned to the Colonel some time after the war, and as far as he knew was receiving official orders from the CSA.  When Onesimus mentions that Kincaid might be a rogue, Sims is uncertain, but seems relieved and says “hey, if that’s true, you may have just turned me from traitor to patriot!”

Men arrive and Sims takes Onesimus’ guns and tells the men that he’s detained the man.  The men in the hall order Sims to “put two into his head,” at which point, Onesimus crushes one of Seri’s totems and takes the form of a hummingbird.  He flies up to the Bull Run in an attempt to disrupt Kincaid’s operations there. 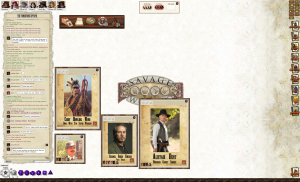