Kincaid was certainly making himself at home, and decided he didn’t need to hear from any of the local law enforcement on the subject.  We were making plans to leave town in the night, when the damned injuns decided to hurry us along..

A few more hours into the chase, Onesimus catches up to the party, almost completely unarmed, but bearing tales of how he disabled Kincaid’s ability to fight form the air.

Shortly thereafter, the party arrives at the stockyards to find a large encampment of Kiowa entrenched – hundreds of warriors, and dozens of families.  The war band had taken Holden to the center of the camp.  The party enlists Chigger’s help to escort them into the camp, and they find Holden being presented to the war chief Howling Wind.  After associating themselves to Holden, they’re all brought into the main hut and presented to an elderly shaman, Tim Green Cloud.

Green Cloud greets Templeton warmly before acknowledging the rest of the party.  Eventually, he turns to Holden, and to everyone’s surprise, apologizes.  He states that he asked the spirits to show him their enemy several months ago, and Holden’s face was presented to him.  But in recent days, his visions have been clouded, and he’s received portents of an older man bringing fire from the sky, presumably Kincaid.  He’s still unsure about Holden, and asks him to stay near while he consults the spirits.  He takes some spit and blood and dismisses the party to rest at The Drover’s Cottage.

The party eats their fill and sleeps through the morning and afternoon.

A horse races up to the Cottage and Brady Sims storms into the taproom and stops short in shock to find Onesimus alive and well.  He greets him warmly, then warns the party that Kincaid has ordered the entire town razed.  The word came down through his officers, who had been instructed to find a way to execute every person in the town without causing a riot, then burn every structure to the earth.  He didn’t want the city pillaged, he wanted the city “gone”.

The party considers how to stop the Colonel, and decide to enlist the aid of the Kiowa once Green Cloud emerges from his meditations.  As the night wears on, the party eventually retires to their rooms.

Neither can Al or Chigger.

You barely notice the sound of a door from the rooms above, or the soft footsteps down the stairs.  *tap* *tap* *tap*

But you recognize the voice.

“Deal me in,” says Mr. Perkins in his distinctive, somewhat nasally voice.

You look up in alarm, but it’s almost like a dream.  There he is, in the flesh, or seemingly so.  His suit is impeccably clean and pressed.  He smells of a cologne that’s trying to smell like patchouli and tobacco.  He pulls out a chair and sits down smoothly.

Al deals, almost in slow motion, he’s even blinking slowly.  Must be a dream.  Is it a dream?  Perkins puts a small box on the table, a simple cedar thing, about the size of a cigar box, and slides it to the center.

Chigger is looking at you.  Completely ignoring the newcomer.  His look is intense, focused, but his face is almost completely blank.  Maybe…maybe just a touch sad.  Expectant.

Chigger doesn’t even look at his, he just folds, pushing them away.

Al sighs and leans back in his chair, taking a long, unnaturally slow pull from his drink.  He didn’t deal himself in.

Perkins turns his cards over.  Nothing.  Slop.  Ten high.

You reach out and pull the cedar box and handful of tarnished coins towards you while Perkins rises from his seat.

You open the box.

“You know,” says Perkins, distracting you from the contents of the box, “you wear the wool well…but your fangs are starting to show.”

Chigger hisses and waves his hand dismissively, his eyes never leaving you.

“In the end though,” he continues, turning slightly, “we can only be that which we are.”

He walks up the steps slowly, and through the door of one of the guest rooms.

“Welp,” says Al, at regular speed, “I think I may mozy upstairs and see if Lady Wednesday is feeling charitable.”  He smiles weakly, heaves himself out of his chair, and up the stairs.

The cedar box is gone, just the few ante coins remain.  On your hand, though.  The ring with the black onyx gem.  Won in a card game in Atlanta.  Five years ago.

Chigger finishes his drink with a swig.  Then reaches across and finishes yours.

You feel it before you hear it.  Some wrongness.  Then the sound.  Steam gatlings.  Two of them…piercing the night from the direction of the Kiowa camp.

You and Chigger race out the door into the cold.  You hear gunfire and commotion near one of the larger campfires and race that direction.  You feel the cards in your hand.  You can hear the dice.

More steam gatlings.  Screams.  Small arms fire.  Bolts of green energy from Jacob’s rifle streak down into the commotion from his window at the Drovers Cottage.  A small explosion.

You burst through the press of bodies into a scene of carnage.  An automaton, like the one at the train.  Wrecked now, but its twin cannons still steaming in the cold.  Dozens dead.  Bodies broken.  Burst.  Spilled.  Ahiga is here, attempting to bandage the wounded, screaming for Olivia.

You recognize the tent the machine was focused on and you realize the shredded pile of gore in front of it is what remains of Tim Green Cloud.  Howling Wind is on his knees beside the body.  A wail escapes his lips.  It’s joined by others.  And more.  And yet more.  The sadness and rage of an entire people rips through the still cold. 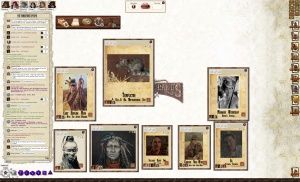