Alright asshole, let’s see how tough you are without your pet succubus….

The session begins with a cutscene:

Time seems to slow, you’re frozen in place, your bodies are not your own.  Wu glides into the room, stepping gracefully over the bloodied corpses of his henchmen.

He’s going to walk casually through the room and snap each of your necks while the rest look on in horror.

And then Holden bursts from the water-closet, skids on a pool of blood past Wu, whose eyes widen in surprise and…recognition?  Holden slides down several steps onto the mezzanine, and unleashes a glowing card from his fingertips that seems to tear the fabric of reality with an audible scream.

You don’t see what it hits, but suddenly the death grip on your minds vanishes, leaving you stunned and gasping.

Wu and Holden have locked eyes, Wu stunned, and on Holden’s face…fury.  He squints and gnashes his teeth, his body shaking like a leaf.  There comes over the whole house the sound of rolling thunder, deep, sustained, like the ocean against a breakwater.  The windows shudder, small items on Lebold’s desk rattle and fall off.  The air seems to go out of the universe, and you feel as if you are ants scurrying amidst the feet of invisible giants.

Around the room and in the hall, the dead bodies of the guards rise silently to their feet, gore spilling out of bullet holes, limbs and necks hanging at awkward angles.  They turn towards Wu and begin shambling towards him.

A look of stony calm comes over Wu, and in a single, fluid motion, he kicks up a fallen Colt revolver from the floor and with a whirling spin, kicks it across the room at incredible speed, hitting Holden square in the face and dropping him like a sack of potatoes.

Johnny Wu turns back to you.  “You have no…idea…what you’re doing,” he snarls.

And then Ed tackles him and both go tumbling over the balcony rail.

The party attempts to fight off the multiple house guards while Ed engages Wu.  It rapidly becomes clear that Wu is nearly untouchable, and every time he hits, he seriously wounds.  The battle rages on for several moments, until finally Onesimus clears all of the attackers off of Ed and he vaults up and delivers a one-in-a-million killing blow to Wu.

While the wounded receive aid, Onesimus organizes the remainder of the party to search Lebold’s house.  They discover that Lebold is actively involved in funding terrorism against the Black Water railroad, preventing a spur from being built in Wichita, which would kill the Abilene economy by shortening the Chisholm trail.

The party also finds quite a lot of documentation concerning an archaeological dig being funded by an anonymous source and brokered by the law firm of Brooks, Forbes, & Whitney out of Kansas City.  The dig is chartered to find a large stone ring in a very specific set of Mayan ruins.

During the search, Onesimus also finds a single note, in a handwriting that matches nothing else in the house.  It reads simply, “I think my lieutenants plan to kill me.”  Onesimus feels an unnatural chill when reading the note, and every time he considers it thereafter.  He shares the note with Jacob only.

Ahiga searches Wu’s body and discovers only a set of prayer beads and an ornate pocket watch.  Inside the lid of the pocket watch is a picture of Holden, much younger, and a woman.  It appears to be a wedding or engagement photo.  She absconds the watch without informing the party.  The also searches Holden’s unconscious form for his deck of cards, and finds a card that is identical to the one from Mosi, but lacks the hole and the wear.  She marks the card and returns it.

Mosi eventually heads outside, and is alerted to a commotion on the other side of town.  The party, exhausted and lacking sleep, gather and head back into town to where their horses are tethered at the telegraph office.  By the time they reach it, it becomes clear that hundreds of un-uniformed but highly-disciplined men are marching into town, along with cavalry and support.  The CSS Bull Run descends from the dark in the center of town and lowers its gondola to meet the soldiers.  It also appears that some solders are raiding certain houses, including the Marshall’s office and several other unknown residences.

The telegraph operator, standing on the porch and gawking at the late night display, notes Onesimus and is reminded of a response to his telegraph.

Onesimus decodes and reads the telegraph, and sighs deeply. 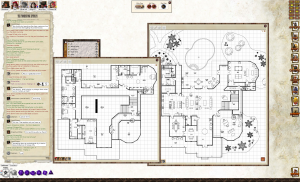