The Red Lion…some little girl snatched out of a tepee and turned into a monster, bringing death and untold dismay to half the Great Plains.  Someone was going to pay, and our new, incredibly well-armed friends seemed all-too-willing to help.  This Colonel Kincaid wanted Johnny Wu.  He wanted Howling Wind.  He wanted Joshua.  I wonder what else he wanted…

As the zeppelin, the CSS Bull Run, ascends into the sky, the party is escorted up several decks to a mess/sleeping deck and left to have a bite to eat and rest.  Most of the party does so, with Ahiga heading down to the lowest deck with the gondola and stables to rest, and Olivia exploring up a few decks.

On the landing deck for the single-seat copters, Olivia chats up a pilot who reveals the ship is likely headed to Salina to take out Wu.  The pilot also reveals that Kinkaid is extremely prejudiced against “specials” and considers it his mission to wipe them out.

Heading further up, she enters a storage room with many crates of ghost rock stored – which isn’t surprising considering the technological superiority of the airship.

During Olivia’s explorations, Seri overhears gunners on the deck below complaining about ghost rock rationing on the ship.

Next deck up she encounters a planning room and studies a large map on the table there.  The map contains Kansas and parts of Oklahoma and Nebraska.  There are a number of notes on the map:

Olivia wakes Onesimus and together they brief the team to be even more watchful of Kincaid then they already were.

When Ahiga wakes, she discovers the playing card she took from Mosi’s body is missing.

In short order, a page arrives to take the party up to the map room where detailed maps of Abilene and Salina are laid out (the previous navigation map is gone).  Kincaid informs the party that with the Duchess gone, Wu really only has two lairs, the first is his mansion in Salina, which Kincaid intends to go and decimate with Bull Run, and the second is the home of Conrad Lebold, Abilene’s wealthiest landowner and chief benefactor.  He asks the party to secure Lebold’s home and confront Wu if he’s there.  Kincaid assumes that by morning, one party or the other will have killed Johnny Wu.

The party agrees and are dropped off on the outskirts of Abilene.  After discussing their fears, they decide to move forward in pursuit of Wu even thought they feel certain to be betrayed by Kincaid.  Onesimus stops by the telegram office and sends a report to The Agency before the party proceeds down main street to the manse of Conrad Lebold. 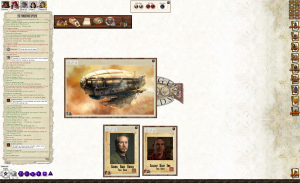