The party and Bigend retire to a private room to dine and talk.  When asked about himself, he is very elusive, insisting that he’s simply an entrepreneur affected adversely by the occupation, but the team is suspicious, and Jack is sure he’d overheard the name in conversation during his leave in Shenzhan during Agamemnon’s refit.

Bigend introduces the team to Jane Sagan, a Clan Warrior who had defected to the resistance.  After answering some speculation about the nature of the Warriors, the following points are discussed:

Bigend’s mission for the squad is to infiltrate a series of Ares Arms offices in an office building downtown that has been secured by the Clans and get Mr. Case access to their computer systems, all the while “being seen” – and making an impression on the impressionable – hopefully earning some recruits at the same time.  Case will download the cyberweaponry expected to be on the central servers, and the team will make an escape.
That night, when attempting to find the head, Ian stumbles upon Bigend’s quarters and witnesses the man changing his shirt.  His torso is covered with tattoos of all different fonts and sizes, all of which reading “All of the warriors, none of the poets”.  He doesn’t mention the sighting to the rest of the party.
The next day, the party gets some civilian gear and heads out to take a look at the office complex.  The building in question has been secured by the Clans, all employees wear security badges, and the building is guarded by a star of Elementals – two at the front entrance, one at a rear loading dock, and two on the roof with a small specialty jump craft.  Ian swipes a badge from an employee approaching the doors and infiltrates the building.  He finds that the elevators and the stairwells all require propert authorization to get through, and is unable to get to the Ares Arms offices in question before being pursued by security.  As he slips out of the building barely ahead of pursuit, he notes that the security apparatus of the office building have captured a photo of him.
The party heads back to the bolt hole to plan the breach. 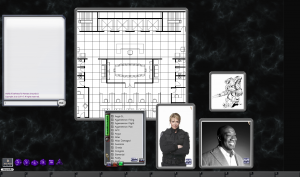