After the surge, the lights flicker off again, but it’s apparent that several systems are now operational.  After some work, Mitch finds that the glasses are part of an augmented reality system, and pulls the ship’s floor plan.  Pvt. Buck doesn’t respond to Janks’ orders, but makes an obscure statement over the radio about there being a “piece missing, but there’s a head”.

The squad moves down to deck three, at which point Blake notes that his suit had been compromised in the firefight and stops for a moment to repair it.  The team moves on to the medical suite – upon gripping the latch for the door, it comes free in Hudson’s hand and begins to crawl up her arm.  Janks and Stella pull the thing free, but it begins to chew through Janks’ suit.  They cast it down and Hudson puts a few bullets into it before it goes still.  Aaand then it jumps up and attempts to drill through Hudson’s face plate.  Jack snatches it away and casts it aside and Blake riddles it until it’s obviously destroyed.

Moving into the computer core, the team finds a section of the core missing, and in its place, a severed head.  The augmented reality glasses allow Mitch to access a series of master controls for the ship.  He immediately uses the security cameras to locate Pvt. Buck in the forward gunnery bay, and then begins re-pressurizing the ship in order to let the air scrubbers identify if there are any foreign elements in the air.  A futher review of the internal security cameras reveal no other obvious hostiles on the ship.  Janks notices that Blake is becoming increasingly agitated, and attempts to calm him a bit.

The team moves to the forward gunnery bay, and Janks starts sneaking up on Buck, who is facing a small observation port.  Hudson notices flashes that may be explosions in the port.  Janks tackles Buck and subdues him and finds that Buck has a one-inch hole in his faceplate and a similar hole through his left eye socket.  He can see a glint of the silvery material in the marine’s brain cavity.  A high-pitched wail ensues from Buck and the team evacuates just before his head explodes.

Back in the computer core, the air analysis reports no unknown elements.  Also, a view through the ship’s external cameras reveal a raging battle taking place outside.  A League-era Aegis heavy cruiser is firing torpedoes on Normandy, which are being intercepted by Agamemnon and her fighter screen.  The team decides to power-up the ship and attempt to join the fight (or at least maneuver out of harm’s way).

Stella, Jack, and Mitch get Normandy moving and make a few passes at the Aegis before Agamemnon, now free to maneuver, closes in for the kill.  When the battle is done, Becker dispatches medical and security personnel to help secure the ship and quarantine the team.  During Janks’ report, he mentioned that Blake had to patch his suit, to which Becker replied, “Blake who?”.  Everyone looks at each other in shock (and Becker quickly verifies with Summerville, Barrett, and the ship’s roster that no Jeremy Blake ever served on the ship).  It becomes apparent that no one outside the team on the Normandy knows who Blake is.  When confronted, the man appeared to take up a reverent pose, and speak in a very inhuman voice:

“This place has been sanctified in cunning and blood.  It is good.”  He then looks up, adding, “Do not presume to steal from the Consu again.”  A fire then consumes Blake and the ashes drift away, as if he were made of paper.  Immediately, the team’s memories of Blake begin to get somewhat fuzzy.  The team finally concludes that Blake never truly existed, but was instead a construct implanted in their memories at some point after boarding the Normandy.

The session ends with the team being examined by the Agememnon medical staff.  Darryl Gerst, who remembers Blake as a career-long best friend, kept asking the nurse how many people she saw in his squad photo.

“Darryl, there are only eleven people in that picture,” she insisted.

Gerst sighed in frustration and despair. 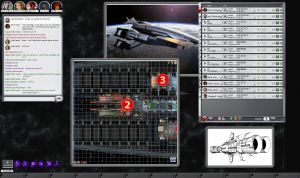