Later that week, Colonel Becker holds a funeral and honors ceremony, during which she recognizes the boarding party with Silver Stars and issues several promotions – including elevating Janks to Command Sergeant Major and Mitch to Major with a commission to command Normandy.  Mitch offers the XO and chief helmsman position to Stella, but she refuses, so he recruits the staff from the Coyote – Faro, Spunkmeyer and Chief Wilson.  Though not mentioned in the ceremonies, Jeremy Blake receives a spot on Agamemnon’s memorial wall.

A few more weeks and a few more jumps brings the small fleet finally to New Samarkand – where the meticulously-laid plans of Jameson and Sims come to fruition with hundreds of new recruits fleshing out the ranks and millions of tons of supplies and materiel brought onboard.  The Cynae-2 and Marathon-2 also arrive and berth in Agamemnon’s freshly-repaired docking rings.

A sizable fleet has gathered at New Samarkand, including the Texas-class battleships Dire Wolf (Natasha Kerensky’s flagship) and Kojiwa (Admiral Ling’s ship).  Kerensky and Ling come aboard for a tour and war council.  Becker returns Lev Arris’s sword to Ling, who obviously had a deeply personal relationship with the man.

The tactical discussions bring some facts to the table:

The Agamemnon sits in refit for two weeks while the crew rotates through leave on the planet, and another two weeks pass with the entire fleet on high alert.
The session ends with a report of a massive gravitational anomaly coming in from one of New Smarkand’s moons.  Summerville calls the ship to battle stations.
“Here they come.” 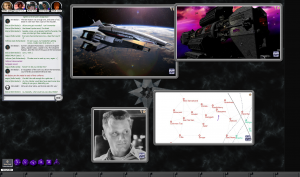