As the team moves  aft, they lose contact with Agamemnon, but remain in contact with Cpl. Davis and Pvt. Spears in the Cheyenne – the skin of the Normandy appears to absorb emissions and no signal appears to be able to leave the craft.

Janks gets a flash of danger and stops the party, but not before Pvt. Page is sliced neatly in half by a  mono-molecular  tripwire stretched across the passage.  After Hudson comes up with a strategy for sweeping the party’s path, and removing the dead marine’s remains to the dropship, they continue into a CIC area.  Stella notices that there are small cabinets of eyeglasses scattered around the ship.  When examined, they have a flashing “Offline” in the corner.  They also appear to have a wide-angle sensor mounted in the bridge of each pair.

The party follows the blood trail through the CIC and into a small lounge, through a conference room and small lab, and into a large intelligence center, where they find a human skin stretched across a holographic map table covered with strange lettering, presumably written in blood.

Leaving Jack, Blake and Pvt. Stearnes to guard the retreat, the party files down a service shaft to the engineering deck.  There, they find what they presume is a majority of the crew in a service space, all having been horribly, but carefully and ritually mutilated, including two of the green-skinned Clan warriors.  They proceed into the engine room, where Janks chooses not to restore power to the ship, but the party discovers the following about the craft:

The party realizes that Pvt. Buck has gone missing, having become separated from the party while bringing up the rear in the access shaft.  He doesn’t respond to attempts to contact him.
At roughly the same time, from their vantage point in the intel center on Agamemnon, Barret and Becker observe Davis and Spears’ life signs flatline, though they see no sign of what could cause it.  They assume equipment malfunction, but the two marines fail to respond.
After attempting to relay to Agamemnon through Davis, Janks orders Blake and Stearnes to investigate the dropship.  At the same time, Becker observes Spears making his way to the cockpit of the transport.  When Stearnes comes around the corner, Davis riddles him with bullets, and begins a brief firefight with Blake and Jack.  Janks and the team rush to assist.  As they’re passing through the CIC, Blake finally scores a hit on Davis, and Spears engages the Cheyenne’s drive, rocketing it away from the Normandy, causing a violent evacuation of the craft’s stale atmosphere.  Stella and Rance are barely saved by Janks and Hudson, while Jack is similarly rescued by Blake.  Stearnes and Davis are presumed ejected into space.
Rance takes remote control of the Cheyenne and attempts to guide it back to the Normandy, but Spears retakes control and sets it on a collision course.  The team slams the outer door of the Normandy shut and takes cover, while Agamemnon fires a shot and destroys the transport before it can ram Normandy.  After the debris has passed, Janks re-opens the outer door to converse with Becker and receive orders.
As they’re talking, Pvt. Buck comes on the line, saying “Hey guys, I think I found the computer core…”.  The outer door slams shut, and the Normandy interior lights blaze into life. 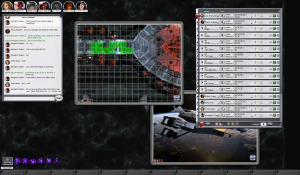