The party cautiously approaches Muerdetta’s camp and sends Ralben and Nimue in first to prevent bloodshed.  When first confronted, Jacob notes that Muerdetta is holding an Elven magic wand that had been secured at the College Arcanum that provides the bearer with extreme power.  Jacob also notes that Mengst is wearing two, not one, rings of power around his neck, as well as detecting a smattering of other magical artifacts in the party’s gear.  After defusing the situation, the two parties combine camps.  Several details emerge from the ensuing conversations:

Several days pass, during which units of the Black Rose Society begin to arrive, including one led by Moriel Celebhen.  When the majority of the forces have gathered, the Society, a mere 1500 soldiers strong, marches in force to besiege the Waygate. 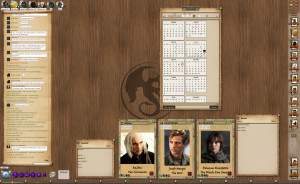