The Kisharan airship closes the distance rapidly and fires several cannons.  Poppy’s ship lurches suddenly.  While the crew scrambles to return fire, Poppy leaves her cabin and goes below.

Snot musters a crew around the mortar at the rear of the ship and takes two shots, consuming the ship’s remaining powder stores.  The first shot crashes into the prow of the other ship and the second its air bag.  Both ships begin descending erratically as both crews attempt to keep them in the air.

Snot goes to check on Poppy, and finds her in the “engine room”, which had taken a direct hit from the Kisharan vessel, killing over half of the imprisoned mad priests.  Poppy was desperately attempting to keep the rest awake and actively keeping the ship in the air.

Meanwhile, the ships come alongside each other and the Kisharan vessel unleashes a broadside into the man-o-war.  Jacob casts a spell on Nimue, allowing her to vault across the span to the other ship, but instead of landing atop the air bag, she lands on the deck and immediately has to engage the marines there.

The man-o-war, still struggling to stay in the air, comes alongside the Kisharan vessel, and Matten, Snot, and a cohort of marines cross over.  Poppy’s vessel continues to destabilize, and she orders everyone across the gap.  The party and the crew of Poppy’s man-o-war make it across and secure the Kisharan vessel, just as the man-o-war plummets several thousand feet into the Ar’Avariel Forest below, taking Leitus’ records and the prisoner Gerard with it.

Poppy’s crew and the party pick a handful of members of the captive crew to stay aboard, then land the vessel and offload the other prisoners, guarded by the remnants of Poppy’s crew not needed on the much smaller Kisharan vessel.

They take to the air again and head towards Hillcrest. 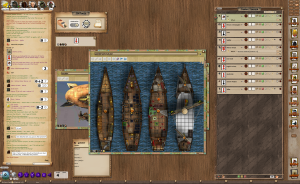