Khevoran 3 Session Notes – 19 May 2018
19
June, 2018
By Debinani
Khevoran 3: The Emperor of Nothing
Khevoran 3 Session Notes – 19 May 2018
25-28 Gozran, 44 NC
The session begins with Gidget asking a question:
“‘Scuse me, I generally don’t like to get too involved in all yer carryin’ on, but I jes wanna clarify something….  So you’ve got this bit of stuff, she gets attached to the assault on Westergarde, gets the romantic attentions of the guy who’s not only the next emperor, but also the only chap we know of who can touch the rings without ‘is soul gettin et.  She manages to lift the manual for the Waygates off of ol’ Ralben, and lift the key to the Vault of Teribain off of the Wizard of the Wilds, which, by the by, know one knew ‘e ‘ad.  Then she and Mengst go flitting off in the wind and zip themselves over to Teribain.
Jes ‘oo the ‘ell is this bint?”
There is silence for few moments.  Lord General Vane sits next o the chessboard and fiddles with the pieces idly, and then begins to laugh somewhat mirthlessly, shaking his head.
“She’s the commanding officer of the Black Rose Society.  They forgot who they were for a time…she obviously didn’t….”
He resets the pieces on the chessboard.
“I’ve been playing the wrong game.” Vane begins moving chess pieces, replaying a game.  “He was trying to tell me, but I didn’t see it…”  He moves several more pieces, muttering to himself.  “Rook takes Korgrammsen.  Pawn takes Rook….”
“Why Leitus?  Why kill Leitus now? There had to have been something…some knowledge, some artifact…”
The party points out that several artifacts and documents were retrieved from Leitus’ lair, but most or all were lost when Poppy’s ship crashed.  The general observation was that Poppy was motivated by vengeance.
“No…Poppy Sokeldodge is insane, but she’s not crazy.  This was orchestrated….  And now she has one of my airships along with a Dwarven tactician sent by Ironfist….”
“And of course I can’t track down what’s left of the Society, because Moriel Celebhen’s rangers have whisked them into the ar’Avandriel…..”
Vane peers into the sand pot.  “No response….  I assume there won’t be…he took the oaths too….  And what is our part in all this?”
Vane moves a few more pieces on the board and stops, giving Sanorin an inscrutable look for a long moment, before moving a bishop and capturing the opposing queen.  Jacob sidles over and examines the board, and notes that the bishop was sacrificed making the move.
At one point, everyone’s stomachs turn (except Dan), and both Sanorin and Snot are consumed with pain and horror for the briefest of moments.  The members of the party in the know identify it as a failed attempt to fire the Waygate.
“It’s obvious that whatever the journey, the Waygate is the destination.”
The party inquires about what Muerdetta may have wanted to retrieve from the Vault, to which Jacob responds, anything and everything.  There’s some debate about how best to travel to the South.  Vane chooses to return to his camp and call in his remaining airships, carefully replacing the crew of at least one so that he can carry the party, but says it could take several days.
After he departs, the party attempts to determine fast ways into the South, and chooses to leave the farm and have Snot’s people help them through the mountains.  They leave a note coordinating pick-up points and days in case Vane gets his airships arranged swiftly.
Jacob recalls a cave in the mountains that might be related to the Waygates in some way, and the party decides to head there first.
After several days of travel into the mountains, they party comes across the cave in question, their explorations take them to a nest of orcs and trolls, which the party dispatches.  In the fight, Dan is wounded, revealing him to be one of the late Futz Fiddlygibblet’s NewElves.  Even after the injury, Dan doesn’t seem to be aware of his artificial nature.
The party proceeds into a passage worked with Warpstone like the Waygate and eventually come to the mouth of a huge cavern containing a large city of the stone, a pale blue orb illuminating it with a cold blue light and shadows. 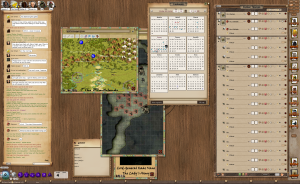