Poppy recovers and heads out of the compound to call in her ship. Meanwhile, the party clears the rest of the cave system, finding Leitus’ library. Over the course of the subsequent hours, the party transfers a majority of the contents of the library to the ship while Kagdir and Snot embed powder charges around the makeshift Waygate. They question the guard captain Gerard briefly, but only discover that he was a fanatic that knows very little about Leitus and Gideon’s motivations. They imprison him on the ship. Poppy secures herself in her quarters in a funk.

After the charges are set, Kagdir lights the fuse and the ship makes haste for altitude. A short while later, there’s the expected explosion immediately followed by a detonation so huge it takes off the top of the mountain and creates a bang that seems to strum the very strings of reality.

As the sun sets, the ship returns to the crater at what is now the top of the mountain and the party disembarks to investigate – wanting to ensure that the Watgate was destroyed. They arrive at the center of the blast and find no evidence that the gate survived. As they’re about to leave, they hear the sound of running water and see a woman on the other side of the crater, looking at them curiously. Matten and Jacob identify the woman as Cyan Marinetta, the Ringwielder of Water, and the party rushes away and sails clear of the mountain.

The ship sails North through the night. The next morning, a lookout notices another “ship” in the distance, resolving into a manner of blimp. It begins to pursue the ship, rapidly gaining ground. Attempts to get Poppy to emerge from her cabin and take charge prove fruitless. As the airship approaches and begins to fire, Poppy opens the door to her cabin and shoves a note into the hands of whoever is waiting outside. It reads, “the Etu’Sauri is in charge”. 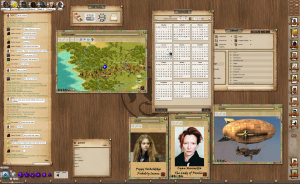