THE STORY SO FAR

Sergei Volkov and Smoot, both former Black Rose Society officers, have been waging a civil war against Duke Stephen Tyr for years, and gather a group of individuals together to help end the war by invading the city of Westergarde.  They seek to rescue Jacob Mengst, the son of Kironius Mengst and Anastasia Altair (the heir of former Emperor Joseph Altair).  Smoot assigns one of his specialists named Dan Strait to the team.

At the same time, Lord General Isaac Vane, commander of the Kisharan armies at High Guard Fortress, and Thane Ironfist (nee Gronk, nee Ari Stonehand, RIngwielder of Earth), conspire to take advantage of the Kisharan Waygate being buried to slay Aril Flambeau, Ringwielder of Fire and leave Khevoran in the hands of Cyan Marinetta, Ringwielder of Water, who, Vane claims, is willing to let the people of Kehvoran rule themselves in peace.  To this end, he sends several spies into the North, including his apprentice Matten Rassk and house guard Nimue Levinsdaughter to insinuate themselves into Volkov’s army and eventually forge an alliance.  Ironfist sends a Dwarf named Kagdir Throrson to Volkov to help, and to act as an escort for Matten.

Meanwhile, Shara Tev, who has been sheltering a Halfling named Sanorin Fafnir for several years, is assaulted and killed by Gideon Nell.  Before her death, she sends Sanorin and their mutual friend Syl to Volkov’s care, notifying Jacob Dain, the Wizard of the Wilds of Sanorin’s value.  It turns out that Sanorin is completely immune to the powers of the Ringwielders, and seems to be connected to the land in a very unique way, much like another famous halfling Peruppi Dentkettle.

Jacob befriends an extremely articulate and resourceful goblin named Snot (or Starry Night Over Trees) who has been named Stra’Chick by his people, which is somewhat of a cross between a king and a champion, and has been sent to deal with the surface peoples to help his people escape the denizens of the depths and aid in fighting the Kisharans.

After securing some siege equipment, the party invades Westergarde and slays Tyr.  They secure the Ring of Spirit that had previously been won by Kironius Mengst and free Jacob Mengst and Ralben, the wizened chronicler of the Black Rose Society who had been acting as a ward and teacher of young Jacob during his capture at Westergarde.  Here, young Jacob meets Delayne Muerdetta, the XO of the BRS, who had been accompanying Volkov’s army.  By all accounts, the pair become smitten and disappear together with both the Ring of Spirit, and a book that was in Ralben’s possession.  He indicates that his book would provide the Ringwielders with a huge advantage, and perhaps grant them greater control of the Waygate. Furthermore, now that the book is out of Ralben’s possession, he insists the Ringwielders will be able to track it.

At very nearly the same time, Vane’s army invades the North, scattering the BRS army defending at Everwatch, and slaying their CO Captain Tennyson.  As this goes against Matten’s narrative of Vane’s intent, Volkov and Smoot send the party to meet with Vane in secret and deliver a communication device so they can parlay.

The party is ferried on a flying ship by Poppy Sokeldodge, a halfling of some renown who, halfway into the trip, changes course to go avenge the death of her friend Vladimir Korgammsen at Westergarde by slaying the ancient elf Leitus ar’Shamrael’Vin and his servant Gideon Nell.  With Poppy’s help, the party does so, discovering on the way that Leitus was attempting to build his own Waygate and desperately wanted to take possession of Ralben’s book as well.

After disposing of Leitus and his Waygate, the party encounters a Kisharan airship and ends up securing it.  In the captain’s paperwork, they find evidence that the ship has standing orders to seek someone looking like Mengst and Ralben, as well as a book matching Ralben’s description of the tome.

The party eventually comes into contact with Vane at the farmhouse where the Altair family fled to after the initial Kisharan invasion.  Vane says he was ordered by Flambeau to invade and to find the tome at all costs. To that end, he’s scattered his forces into the North to seek it out.

Now that Vane and the party are together, the subject of ending the Kisahran reign comes up again.  The window of opportunity will likely only last until Flambeau unearths the Kisharan Waygate in the South, which is likely to occur in weeks, not months.  And Vane comes to the key problem facing them all: 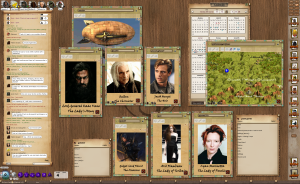