The party debates for a time about their options.  After much discussion, several facts and theorems emerge:

While Vane is speaking with the party, he is also in conversation with Volkov via the messenger book.  At one point in the conversation, Vane reveals that he believes that the Lady of Fire has invaded Westergarde, as Volkov scrawled a message stating a disturbance at the gates followed by a “She’s here.”.  Shortly thereafter, the book itself immolates and Sanorin is doubled over with a sense that many, many people died suddenly.  The party assumes the worst, that Westergarde, the jewel of the North, has been destroyed.

When asked about how Flambeau could have that power and not used it before now, Vane reveals that the Ringwielders are operating on a sort of “reserve” of Kishara’s raw power, and that the Ringwielder of Fire likely used up a majority of hers in such an act.

At one point during the conversation, a rain squall blows in across the mountains.  Vane appears to be having a discussion with the Ringwielder of Water – who is dismayed at his subterfuge but seems to lend a tacit support for the plan.

When Snot checks in with his contacts, he receives a message from a sect of goblins operating in the South, stating that people matching Mengst and Muerdetta’s description had been seen days ago in the city of Teribain.  There is some debate over how the pair had traveled so far so fast, until Jacob discovers that an artifact that he had in his possession was 1) no longer in his possession and 2) perfectly capable of transporting the bearer to the ruins of the College Arcanum in Teribain. 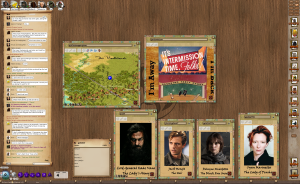