Ralben goes on to describe how Levin had begun to become mentally unstable, and he had started rambling in such a way as to reveal what he had referred to as one a secret that could not ever fall into the hands of the Kisharans.  He states repeatedly that the secret would not only doom the people of Khevoran but of “countless other worlds”.

Ralben relays how he hired a pair of local toughs to raid Levin’s home in search of a treasure that didn’t truly exist.  During the robbery, Ralben made off with his purloined book, and the thieves murdered Nimue’s father.  The local magistrate ended up catching the robbers and putting them to the noose.

Ralben seems to believe that all roads are now leading to the Waygate, and a confrontation there is imminent.  When asked whether it’s possible he could be being fooled by Muerdetta, he seems legitimately surprised at the thought, but after consideration finds it doubtful.

Ralben offers the party transportation to the Waygate on the following day.  The party beds down for the night in the abandoned city.

The next morning, provisions are provided and everyone makes ready to travel. Ralben informs the party that “they’ll know” when it’s time to gather in the square to leave.  He departs for a different part of the city.  Snot and Nimue follow him, at first in secret, but when revealed, openly.

Ralben visits what appears to be a cemetery on the edge of town and sits at a single marker for an hour, then enters what appears to be a bunker and closes the door behind him before Nimue can follow.  She returns to the party, who had been idly exploring around the town square, but had discovered little.

After a short time, there’s a deep thunk deep in the bowls of the city, and the sun-like orb at the top of the cavern flickers momentarily.  A few moments later, black wisps of a smoke-like substance begin streaming from the edges of town up into the light, as if being drawn in by a vacuum.  Shortly thereafter, it becomes apparent that the material of the city itself is dissolving into the smoke.

Ralben arrives and leads the party to a small, nondescript building and ushers them inside of an empty room the size of a small hut.  He manipulates controls on a small pedestal in the center of the room and everyone’s ears pop with a sudden pressure change.  The door re-opens to reveal a wooded mountainside.  After the party leaves the room, it dissolves into smoke as well, leaving an empty shallow cave.

Ralben offers to lead the party to where he feels his tome is located, and they set off.  After nearly two full days of travel into the foothills surrounding the mountain,  they find themselves close enough that Ralben can’t tell exactly where to go.

Snot scouts out and finds Delayne Muerdetta, Jacob Mengst, and five others in black Society cloaks making camp. They’re carrying heavy packs and saddlebags, but there’s no evidence of any horse around.   Snot manages to infiltrate the camp and steal Ralben’s tome from Muerdetta’s things before returning to Ralben.

After a tense moment, Snot returns the tome to Ralben who puts it in his sack and states, “Well, let’s go say hello to our wayward Emperor.” 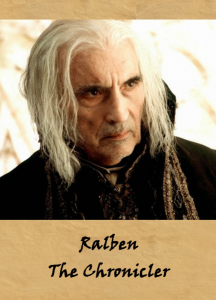