The party begins to explore the city of black stone.  The goblins of the party have a very different experience of the city – apparently the city is brightly colored with murals and art, but it’s only visible in spectra that they can see.

After a lucky break discovering how to open doors in the buildings, they find that they all appear not only completely abandoned, but completely empty as well.  A city of empty rooms.  A few dozen yards into the city, they find what appear to be the blasted remains of several orcs.  While examining the remains, they begin to hear heavy footsteps, which resolves itself to a 10-meter high golem apparently made of the same material as the city itself.  It broadcasts a demand in a language no one understands, so the party retreats back to the entrance.  The golem follows them so far, then seems to lose interest.

Snot takes off across and through building rooftops to explore the city, and the golem pursues, but can’t pin the goblin down.  At the same time, Matten steals into the city in an attempt to distract the giant.  The golem loses interest in Snot and pursues Matten back to the entrance.

At the city center, Snot discovers a bedroll and travel gear in one empty building.  After stealing some writing instruments from the bag, he returns to the entrance.

Meanwhile, Jacob was deciphering the language used by the golem, which seemed to be an extremely ancient variation or root of Elven.  He discovers that the golem is demanding a passphrase to allow entry.  Jacob attempts to provide a passphrase, and the golem attacks.

The creature launches explosives into the midst of the party, and in the first salvo many are injured.  Dan’s three goblin companions are killed.  Matten attempts to attack the creature while the rest of the party retreats, and quite dramatically destroys the creature.

While the party is recovering, they hear another approach.  Around the corner comes Ralben, who sighs and says, “Oh, it’s you.”

Ralben escorts the party back to the city center and into the building where Snot had found the campsite.  He touches the wall and a table, chairs, and even food emerge from the black stone.  He states that it’s not the real thing, but it’s nourishing and tastes nearly the same.

There’s a lot of back and forth in the conversation, and Ralben remains fairly cryptic and elusive, but the party learns a number of facts:

Nimue pressed Ralben about the tome.  Ralben told the story about how Nimue’s father discovered the tome at the Waygate site and discovered its secrets.  Ralben said his mind was gone at the end, and the secret must be kept.

When Nimue asks directly if Ralben killed her father, he says, “Yes.” 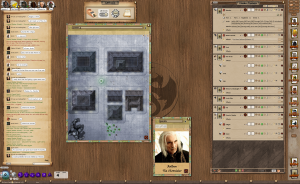