The party is stunned for a moment at Volkov’s announcement.

”So much for wanting peace, eh?” quips Smoot.

After brief exchange, Volkov affirms that Gronk corroborates the story of Vane wanting peace, and that his hand has obviously been forced.

The collective team brainstorms for a time.  The news of the invasion had been delivered through magical means and had coincided with the conquest of Westergarde.  There was quite a bit of speculation about the motivations of the sudden shift in tides.

Ralben rather sheepishly admits that’s there may be an alternate reason for the assault.  He tells the gathering that Delayne Muerdetta had stolen an item that belonged to him, and the Ringwielder may have detected it was no longer under his protection.  After a brief sidebar with Jacob, he explains more fully.

After some considerable exposition, the following is a summary of the party’s understanding of the state of affairs:

Upon leaving the briefing, Gidget and Faun fall into step with Sanorin, having silently decided that they’ll add to his guard.  The party gathers supplies and meets up on the docks the next day, where it is revealed that Poppy Sokeldodge is the captain of the black Man’o’War that aided in the assault on Westergarde.  They board the ship and head out to sea.  After a time, the ship turns around and begins heading East back towards the shore, and then some magical effect takes over and the ship begins to fly.

The party soars off into the Eastern skies towards High Guard fortress. 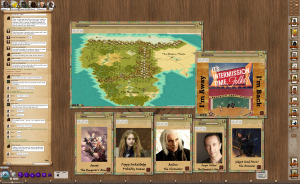