The party rapidly dispatches another wave of guardsmen, including subduing a man who appeared to be their officer, and then takes a few moments to rest and rearm.

When they advance into the next chamber, Jacob gasps in dismay.  Dominating the center of the large room is huge ring of interlocking black stones covered in a mix of Elvish and an unknown script.  “He’s built one…he’s built a gate…”.

The doors to the chamber slam shut, save one, and through that one enters Gideon Nell, carrying a bleeding, beaten, and unconscious Poppy by the nape of the neck.  He tosses her idly to the corner of the room.  He gloats somewhat gleefully that he has both Jacob Dain, who caused him so much grief in Riverton, and Sanorin, who his master has been seeking, within his lair.  Like all evil masterminds, he takes a breath to reveal his evil plan, then Syl shoots in him in the face.

A fight ensues.  Gideon is inhumanly strong and tough, but the party gangs up on him.  When they finally strike a death blow, the body of Gideon bursts apart and a giant fire demon emerges, and the fight continues.  At one point in the fight, Matten receives seemingly direct intervention from the spirits of his sword.  After a brief struggle, the party brings the demon down.  Almost immediately, everyone feels a lurch in time as it seems to slow down and freeze in darkness, then speed back up again.  In the blink of an eye, the party finds themselves surrounded by dozens of soldiers with crossbows.

At their head is Leitus ar’Shamrael’Vin holding a small device (presumably the time dilation device he gained some infamy for).  The Elf has the alabaster skin of age, but it seems to be black-veined and cracked with warpstone poisoning.  He’s irritated that Gideon was defeated, but he seems singularly obsessed with discovering the path “the book” took out of the South, and begins the interrogation sure that Jacob had some information.  He then focuses on Nimue.  “You’re Colonel Levin’s youngest…” he says.  Then asks about where her father’s possessions are.  “The old wizard caught up to him didn’t he?” he continues, “But he doesn’t have the book now, I can feel it…”.  He goes on to explain that he finally collected enough warpstone to build a Waygate and “take the battle to Kishara personally…” but he needed a final key to be able to activate it.  His rantings were somewhat disjointed.  The session ends with a cutscene:

You’re standing there, hands out at your sides, trying not to make any sudden moves as Leitus paces and gloats.  Your eyes drift past the still form of Poppy and you suppress a gasp as you realize she’s looking at you.  And she’s smiling.

She sees that she’s caught your eye.  Her smile gets a little bigger, and she winks at you.

You cough despite yourself, and for the moment, all eyes in the room are on you.

It’s as if everyone is moving in slow motion except her.  Poppy hops to her feet.  She drops a small knife from her sleeve and almost casually puts it into the groin of the nearest guard.  With her free hand she grabs the man’s crossbow as he drops it and puts the weapon to her shoulder.

There’s a moment, just the barest sliver of time, when Leitus turns and catches her eye, an exclamation of shock on his lips, and then the back of his head explodes as Poppy’s crossbow bolt enters his left eye and bursts through the ancient Elf’s skull.

You’re going to die.  You know you’re going to die.  Dozens of fingers are reflexively pulling on dozens of triggers.  As the thought occurs to you, you see Poppy throw the spent crossbow at Leitus’ device.  There’s a lurch as you feel time slowing down even further.

Then an instant of cold, terrible, nothingness.

And then the feeling of speeding up again.  And you’re in an abattoir.

There’re bodies…and pieces of bodies…everywhere.  The entire chamber is drenched in blood.  It’s like a wild animal was unleashed.  And power.  Something.  Several somethings.  Of immense power.  Were spent…died in this room.  The world is a little different than it was just moments ago.  It’s hard to describe, but you feel it.

The only thing moving is Poppy.

She’s huddled against the wall, next to Leitus’ time device, and she’s rocking back and forth slightly, muttering something quietly.  She’s covered head to toe in blood and gore and she’s cradling her repeating crossbow in her arms.  It looks like the weapon was shattered in the fighting.

Sanorin seems to snap out of the shock at the scene and rushes over to see if she’s hurt.  You and the twins following close behind.

When she notices Sanorin, she shakes her head and half-mutters, half growls…

When someone wants to claim the bounty on killing a Halfling in the South, they have to present the hands.

Poppy looks up at him curiously, clearly surprised and confused.

Sanorin continues.  “There was a little girl…after Whisper marched out of The Downs.  She was maybe six…  We only had a few hours to look for survivors before the patrols found us.  I figured she’d hid under a home that’d been torched because she was just…coated in ash….  When I called to her, she slipped away like a frightened shadow.  We never found her.”

Poppy’s staring at him, her face slack, but her eyes wide with surprise.

“It was the town hall,” she whispers, “the ash…it was from the bodies…”

Sanorin reaches out and touches her hand.  “I don’t know what happened to you next, Poppy Lilian Fairweather Sokeldodge.  But…I’m sorry…I’m truly, deeply sorry…that I failed to save you from it.”

Her chin shakes, and then with a great sob she tosses the crossbow aside and clings to Sanorin, weeping.  For a moment there’s no sound but four halflings reliving the loss of their people.

Without looking up from Sanorin’s shoulder, Poppy says, “gun powder.”

Sanorin leans back, and Poppy looks up.

“I have sixty-two casks of gunpowder in my powder magazine.”  She looks at Jacob.  “Is that enough?”

He rubs his beard for a moment, then shakes his head.  “No, not to destroy something of warpstone.”

Poppy nods, then looks at Kagdir. 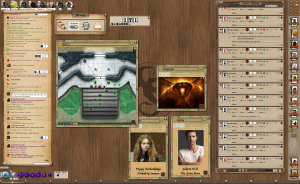