Prelude: Dan
25
May, 2018
By Debinani
Khevoran 3: The Emperor of Nothing
Prelude: Dan

Wherever it is, it must be because you belong there.  It must be pre-ordained.

It’s a workshop, and you’re laying flat on your back, above the blankets, on a small cot in the back, next to a tiny wood-burning stove.  The workshop itself is pretty awesome. There are a number of big heavy tables. One is dedicated to chemistry things. One is dedicated to mechanical things.  One looks like it could be used for biological things. The tables are relatively low, so you bet they’re for a Halfling or Gnome. There are a couple of fogged-up windows, but through them you catch glimpses of trees and snow flurries.  Your things are piled neatly on a shelf next to the cot. Your sword smells freshly-oiled.

You’re not totally sure how you got here.  The last thing you remember is… Hrrm. You’re not sure, but you’re positive it was awesome.  You collect your things and get suited up.

Right about when you’re ready to do some exploring, the front door opens and a whoosh of cold air brings an aging gnome with it, bundled against the chill, tip of his nose red, but carrying two steaming mugs of something.  He nods at you as he closes the door.

“Hey Dan, I see you’re awake.”  The gnome’s name is Smoot. You’re not sure how you know that, but you do.  You also know that he is A GOOD GUY and can be TRUSTED ABSOLUTELY. Which is awesome.

Smoot smiles and hands you one of the mugs.  “Yessir, shitty camp coffee with shitty camp whiskey and a dash of staggeringly good Karpassis cinnamon.”

You drink your shitty camp coffee with shitty camp whiskey and a dash of staggeringly good Karpassis cinnamon.  It’s awesome.

So far, today has been awesome.

“I think Volkov wants to send you on a mission.”

“Will there be danger?”

“The ultimate liberation of everyone from THE BAD GUYS.”

“Yes Dan, we absolutely need you.”

You set your mug down and stride out the front door.  You’re a little disoriented at first, but you remember that you’re on a farm.  The Old Mengst Farm. The place is sacred ground.

You head over to the main house, and you see a number of others approaching from a number of directions.  It seems you have arrived just in time for a meeting. Smoot catches up with you as you enter the back door of the house into the kitchen.  Sergei Volkov is there with two other men you don’t know, but feel that you should – one is a huge Northman, crisscrossed with scars, the other a southern Penshiner with olive skin and a thin moustache.  Sergei also is A GOOD GUY who can be TRUSTED ABSOLUTELY, and it makes you feel good that he’s on your side.

Your side is awesome.

“Good morning Dan,” says Sergei,” you’re just in time for an important meeting.  Why don’t you go on in and we’ll join you shortly.”

“Sure thing, Sergei,” you respond with a thumbs-up.  You head into the large greatroom and take a seat.

Time to be awesome. 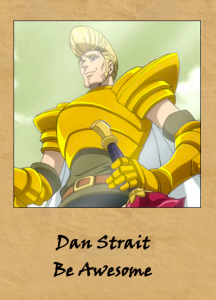