You sat on your heels in a relatively remote passage, outside an unmarked iron door, in the barrens South of Karak ap’Karak.  It’s not as dangerous as it was a few short years ago, when the capital was freshly liberated from the Orcs, but still a little further out into the dark than you were strictly comfortable with.

The summons was simple, practically monosyllabic.  It gave the location and the time along with the royal seal.  You’d been isolated since you got back from that forward recon near Karak Fel.  No one would have much of anything to do with you, and it had been going on for months, and it was getting tiresome.

After a span of time that bordered on insulting, there was a heavy clang and the door swung open.  Warm lamplight spilled out into the hall.  You stood and turned into the door.

And then your breath caught.

The room…no…cavern….beyond that door was huge.  A hundred yards deep at least, and the ceiling was shrouded in darkness.  The floor…the real floor…was about four feet below the level of the door, but that’s not where you were expected to walk.  The cavern was packed full of goblins…hundreds of them…thousands….their hands were upraised in a sign of prayer and deference, looks of fear and horror on their faces, all looking towards a raised dais on the other end of the hall.  They had all been…encased…in stone.  For all intents and purposes, buried alive.  Preserved for eternity.  There were lamps on poles, poles held in the hands of the statue/tombs.  Hundreds.  Casting the faces in ghastly shadow.

Their hands.  You were supposed to walk on their hands.

There were two stone chairs on the dais at the far end of the cavern, facing away from you towards a small fire pit.  Two small streamers of smoke rose from each chair, and you could smell the Penshin leaf cigars from where you stood.

“Come have a seat, Kagdir,” came one voice, thick and clear, with precisely enough volume to reach you across the quiet cavern without sounding like yelling.

Then came the second voice.  It was deep, and rumbled like gravel, but there was an alien quality to it, like there was another voice, younger, smaller, clearer, speaking as if from a great distance.

“Mind your step,” it said ominously.

You made your way carefully across the cavern, stepping on the upraised hands, quietly hoping that you don’t slip between them…or break a finger off…or…anything.  Eventually you make it to the dais and find Borin Ironfist, King of All Dwarves and his father, Thane Ironfist, nee Gronk, or Arkaz’al’Thun:  The Lord of Ash and Stone, Bearer of Ari Stonehand, Ringwielder of Stone.

They were slouched in two huge stone chairs smoking cigars and drinking brandy.  You bowed deeply.  A third chair grew out of the stone across the firepit facing the other two.

“Have a seat,” offered your King.

You sat down carefully, and accepted the tumbler of brandy that was waiting for you.  Borin had a writing desk on his lap and appeared to be completely absorbed with whatever he was working on.  Thane studied you with a look that could only be described as somewhat lazy, or maybe a little drunk.

He was huge – twice as wide as you, still rippling with muscle even at his advanced age, bearing the tattoos of his previous exile and utterly laced with scars.  He was slouching, but he looked like a coiled spring, his eyes twitching a little more than you felt was normal.  There was something there, something deep and remote and dark and mad.  He was single-handedly responsible for saving the Dwarves from extinction, the King who had gone into self-enforced exile and returned a Ringwielder.  Cults were springing up all over.  Thane likely won’t age as a Ringwielder, at least not very quickly.  You fully expect that within a generation he’ll be looked on as a living god.  Within three generations, a thousand years or so, he may be the patron deity of your entire species.

“You made some pretty influential people look pretty foolish, Kagdir,” said Borin without looking up, “And you know full well that Fror was the son of The Rockhound.”

“Yes, sire,” you respond as meekly as possible.

“Too smart for your own good,” sneered Thane in that strange, alien voice.

“Listen kid,” continued Thane, “you did the right thing.  You know you did.  I know you did.  The King knows you did.  That’s not the issue.  The issue is board-stuck-up-the-ass Dwarven fucking pride.  And sometimes you just can’t talk people down from that.  We were thinking that maybe you could use some time away.”

You were expecting this.  “I agree,” you said, “I’d like the opportunity to take a small unit of volunteers North up as far as Karak ap’Kagol, try to find out what’s happened there.”

Thane took a deep pull on his cigar and sighed out the smoke.  When he spoke, it sounded like the distant voice was a little closer, “No.  The troubles in the northern range are a different order of trouble.  We’ll require something a bit more specialized…and deliberate.”

At this, Borin sat down his writing desk, stood and stretched, and wandered off to the edge of the dais, looking out over the statues with his back to you both.  Thane leaned over and rested his elbows on his knees and looked at you somewhat conspiratorially.

“I figured you could go help save the world,” he said.

“Only a little bit.  Listen, kid, there’re only two Ringwielders left out in the wild, and one of them’s at least a little bit on our side.”

“That was a Ringwielder who helped Mengst take out Tahl’Mearis at Westergarde, not some apparition.  Marinetta and Flambeau are the only candidates, and given the choice between those two, it’s clear.”

“To someone who’s known them for five thousand years, yes.  Flambeau is a monster.  Not as psychopathic as Whisper or as conniving as Tahl’Mearis, but bad.  Marinetta is the administrator.  She and I were the ones who would take over the rebuilding a conquest after the other three burned everything down.”  You shuddered a bit when he referred to Ari Stonehand as “I” – you wouldn’t swear to it, but it sounded like the alien voice was closer and the Dwarven one was further away.

“If she wanted to cut ties,” he continued, “the Waygate being buried is a prime opportunity.  But she can’t make a move with Flambeau in play.  And she can’t turn to us for help with the North embroiled in this ridiculous civil war.

“So my friend and Oath Brother needs help, and I intend to start with you until Borin can convince the Council to send a troop.  Here’s the mission:  You’ll meet up with a man named Matten Ra’ask at Karak Ven’s surface trading post, more on him in a minute.  From there you’ll both proceed to Harrowburg where you’ll be met by an agent of my friend Sergei Volkov and escorted to him.  You’ll render him any and all aid he requires to make goddamn fucking sure that murderer Duke Stephen Tyr hangs and some sense of order is restored to the North.”

“Smart lad.  Volkov has some ideas about Flambeau.  If he needs you, I want you to help him.”

“An Etu’Sauri apprentice from the South.  Tyr murdered one of my other friends, a man named Lucas, and kept his Etu’Sauri blade as a trophy.  The Council wants Ra’ask to recover it and be its wielder.  Also, and this is important.  Mengst always kept the Ring of Spirit on him.  It must be in Tyr’s possession and it must be found.  If you find it, don’t touch it with your bare skin.  No matter what, that ring can’t find its way onto someone’s finger.”

You sip your brandy and absorb this for a moment.

“You really do want me to help save the world.”

“I don’t fucking joke, kid.  You’re good, you’re sharp, and you’re one of us.  Not to mention politically expendable.  This is a cause worth dying for.  And even if it weren’t, Volkov is worth dying for.  Go pack your toothbrush.”

You bow your head, down the rest of the brandy, and stand.  Borin finally turns around and comes back to the fire.

You blink.  “Are you saying there’s a legitimate heir to the human Empire?”

“What I’m saying, soldier, is that there’s a young kid to whom I owe a million unpaid debts, a kid with a very unique pedigree, being held by a murderous madman.”

“Help?  I am…constrained.  It’s a little bit impossible to explain.  So I’m helping.  By sending you.”

You get a sense of the old dwarf’s frustration, like a dog straining at a leash.  You bow deeply.

“Toothbrush, kid.  Ra’ask will be at Karak Ven in less than a week.  You’ll need to hoof it up there.”

And you did.  You stood in your billet, literally holding your toothbrush and realizing you had little else to do.  No one else to tell.  You purchased some supplies, and set off on The Great Way to Karak Ven.

You made it in four days just to prove to yourself you could.

You restocked in Karak Ven and went topside.  The bright sky and winter cold was a slap in the face and you realized it had been over five years since you’d been under the sky.

You found Matten Ra’ask at the traveller’s inn attached to the massive Dwarven trading post.  He wasn’t hard to spot with the large Etu’Sauri practice sword strapped to his back.  You watched him for a bit as he moved from the bar to a table to the fire.  To your untrained eye, he appeared ready to wield one of the hundred legendary weapons.  He moved like cat.

He finally caught you watching him and approached.

“Are you my escort?”

You raised an eyebrow.  “Escort?  I thought we were just travelling companions of convenience…”

The other man smiled grimly.  “I’m a Southerner wandering around North of High Guard, something not entirely unlike an Etu’Sauri sword on my back, and asking after the leader of one side of a civil war.”

The trip to Harrowburg was three weeks of uneventful winter travel.  It was cold.  It was often wet.  No one on the road wanted anything to do with the pair of you.  Matten wasn’t the most chatty fellow, and neither were you, so in all of that time your conversations never really went anywhere deeper than idle chit-chat about the shitty road, the shitty weather, the shitty food, etc..

Harrowburg wasn’t a large town, but it was big enough for two inns.  You hadn’t made it to the front desk of the one you chose before you were approached by a man who knew your names and escorted out of town.  A few miles out you arrived at a broken-down farm.  It hadn’t been worked in decades, and the buildings had the appearance of being ramshackle – though you had a hunch that was deceiving.  There were armed people generally trying to stay out of sight, trying to make the place look abandoned.

There was a strange reverence to the place.  A quiet calm that couldn’t be solely attributed to the winter.  And then you realized it.  This must’ve been His home.

You were being taken to a secret meeting at Kironius Mengst’s home. 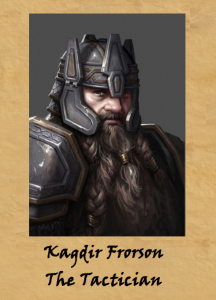