It all really started with the bandits when you were twelve.  You and Jeremy had made all the way through the Southlands to Erebor completely unhindered, hoping to find work on some of the expansive plantations or fisheries there, when you were accosted at random on the road.  Jeremy was stabbed and left for dead, and you were taken to their small camp.

The big bear of a man with the strange longsword walked right up to their fire.  He introduced himself as Count Isaac Vane, ruler of the lands on which they were camped, and he told them they were under arrest for thievery and murder.

All told, there were ten of them.  They didn’t stand a chance.

When they attacked him, it was like the sword leapt into his hand, and he danced among them.  There was no other way to describe it. Dancing. Within seconds they were all dead, and a small troop of Vane’s scouts charged in, seeking to aid their liege and obviously completely unnecessary.

They had Jeremy with them, which was an immense relief, and the blood-splattered Vane plopped down on a log in front of the two of you while the rest of the men took care of the bodies.

“You both look terribly familiar,” he said, without preamble.

Jeremy went into your well-practiced story, “I’m not sure how that’s possible m’lord.  We’ve left our home in Flett in the hopes of finding work in Erebor.”

The big man give you both an unreadable look.  “You certainly don’t have a riverlands accent, son.  In fact, you’ve got a Penshiner’s purr mixed with a Clearwater drawl.”

Jeremy blinked and stammered.  This had never come up.

“What about you, girl?” he continued.  “Are you a child of the riverlands as well?”

There was something in his eyes.  He was huge, terrifying, covered in blood, and you’d just seen him kill ten men single-handedly without so much as breaking a sweat.  But for some reason you knew he meant you no harm.

“No sir,” you responded quietly.

“In the North.  Right about the time of Tahl’Mearis’ march too.  Penshiner parents. Educated in the country.”

He nodded to himself and stood, giving Jeremy a withering look.  “Poor lies are unbecoming, children.”

And that was it.  He didn’t even ask, but from then on you had positions in Vane’s household.  Jeremy worked in the offices that administered his small ocean fleet, while you, after a few years of completely failing at ladylike endeavors, finally convinced enough people that you should learn the sword.  And you did.

You had a natural aptitude that was recognizable, and your opponents always seemed to find your natural charms distracting.  After a few years as an outrider keeping the peace on Vane’s lands, and a harrowing six month stint as a marine on one of his ships, you were transferred to his house guard.  When Vane was recalled to Penshin and named Lord General of The Lady’s Army, you went with him. When he went North and took High Guard back from The Black Rose Society, you went with him.  When he attended their commander’s funeral under a flag of truce, you were there. There were some whispers about why you had risen as fast as you had, or why the old man trusted a slip of a girl to be in his personal retinue.  Strangely, no one ever suspected his interest was lurid in any way. That’s just the reputation the man had.

You never had any deep conversations with Vane, but you were around him almost constantly.  He was a brilliant tactician and Etu’Sauri master – everyone knew that. You found him to be a little cold and calculating, but you saw glimpses of his passion when he was at war or when he was training his apprentice, Matten.

You’d been in his service for nearly four years when you were called to his study unexpectedly.  He was sitting by a fire reading a battered old book when you were shown in. He gave you a polite smile and nodded to the chair across from him.

“Corporal, good.  Come have a seat.”  He continued reading the book while you sat uncomfortably.  There was a full goblet next to the seat, but you ignored it.  After an eternity passed, he closed the book gently, sat it in his lap, and looked at you much the same way he had those few years ago in the bandit camp.

“I knew your father.”  Your jaw dropped. You went from being confused to being completely unhinged from reality.  “I didn’t know it at first,” he continued, “but you have his eyes.”

“Do you know his story?”

“Would you care to?”

“No, it’s not.  But it’s part of the greater story, which is convoluted and I’m only at liberty to tell you a very small part of it.  But I can tell you your part.”

You nod slowly, trying to understand what was happening.

“Your father, Levin.  He was a Peacekeeper officer.  A colonel. Attached to The Whisper’s army, which was, shall we say, a particularly high-risk position.  He was in charge of building Tablenhelm Keep over the top of the Waygate. It was his job for eight years – though Stonehand did most of the actual construction single-handedly.”

“Run?  A subject of some debate.  It’s not like he defected…went North and joined the Society.  Maybe it was because of you and your brothers? Seeking a quiet life?  The Whisper sent some men to hunt him down and didn’t give it another thought.  But some of us wondered.

“Listen, even the least sensitive of us can feel that thing open through all the South and most of the North.  Several times, I’ve been close to it when it’s opened and it’s beyond disconcerting. I can’t imagine what it’s like being near the thing for eight years.  There were times during the ramp-up to the second invasion that the thing opened up four, five times a week with the Avengers going in and out.”

“Know?  No. But he was undoubtedly touched.  If you don’t know what happened, perhaps one of your brothers?”

“If Simon knows anything, he never told us.”

Vane sighed and stared into the fire for a moment.  “Shame. I was hoping.”

He fell silent.  Long enough that you started to become genuinely uncomfortable.  You couldn’t stand it anymore. “What…what were you hoping…?”

He nodded and turned his chair to face you fully.  “Yes. Here’s the deal: I need peace. In the North.”

He sighs, considering you for a moment before continuing.  “Our patron, The Lady of Penshin, desires peace in the North.  Look around. It’s been decades since there was any real unrest in the South.  Since well before you were born. This happens when the Kisharans invade. They’re brutal at first, then things stabilize, the technologies flow in and everything gets better.  If the people of the North hadn’t been distracted by a civil war they might be able to see that.

“I was hoping to work with Mengst to make something happen.  Duke Tyr made that impossible and plunged the entire North into war.  I’m selecting a few individuals. People I can trust. People who, like yourself, have some roots in the North.  I want you to go to Simon. I want you to learn. I want you to join the resistance. Hell, if you can, I want you to be right by Sergei Volkov’s side when he goes over Westergarde’s walls.

“Yes, but arguably one whose interests align with those you’re spying on.”

“What happens if they win?”

“Yes, what happens if they win?  Won’t they come after us…you…here…next?”

“In all likelihood.  Let us hope for diplomacy.”

After a moment of thought, you finally nod to yourself.  “Sounds risky.”

Vane laughed then, a huge, booming bellow.  “Risky? Girl, it’s insane! But we must have a chance at peace.  And there’s no chance with the civil war. Will you do it?”

You pick up the goblet and take a long drink from it.  Mulled wine that had cooled. Finally, you nod.

“Good.  Make preparations.  We’ll have you down the pass in three days.”

And he did.  Vane’s scouts had hidden trails through the pass that passed right by the Society pickets, and within a week you were dropped off in the northern foothills of the Masaan mountains, a few leagues outside of Hillcrest.  You blended in with the normal flow of trade and war refugees on the road and spent several weeks making your way to Harrowburg and Simon’s farm.

He was somewhat suspicious at first, but he eventually bought into the story that you had a falling out with Jeremy and just needed to be home in the North.  He was a little appalled that you’d become a soldier, but he eventually adjusted. You helped around the farm for several months. He was also acting as a caretaker for an abandoned farm down the road, a duty for which he was being paid handsomely, but he was secretive about his employer.

At one point, you asked if he’d known anything about your father’s past.  He immediately said no, but the next day he told a few stories from when he was very young, which seemed to confirm your father had been a soldier of some sort.  There had been a chest, once, but it was lost in the multiple moves around the North in your family’s attempt to stay hidden from the hunters.

Eventually, Simon came clean that he was in the employ of Volkov’s Imperial loyalists, helping maintain the next farm over to act as a waystation in the central plains.  And it was an important place, but he didn’t say why. And eventually, he introduced you to a man who recruited you to the cause.

You fought in Sergei Volkov’s army for nearly three years, eventually becoming an NCO and distinguishing yourself in numerous engagements with Tyr’s army.  You never received instructions from Vane, though you sent updates every few months and received confirmations that those messages had been received.

You met Smoot, Volkov’s right-hand man, after a particular bit of nastiness near Misthaven, and he was impressed with your talents.  He assigned you to a special unit that was going back to “the farm”, which, you found out, was the very one that Simon had been maintaining.

When you arrived, the normally-abandoned farm was abuzz with activity.  Sergei was there, and he was briefing a new crew that you were to be a part of.

It finally struck you on the crisp late-winter morning that you were striding across the farmyard to the main house for your briefing.  The place. There was a serenity about it. A certain…holiness. This had been His home. You were going to a secret meeting at Kironius Mengst’s ancestral home. 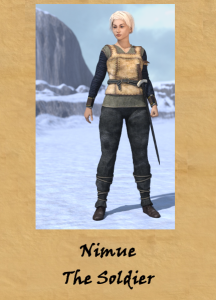