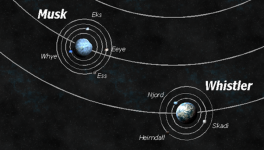 The Lifeboat 5 project was underwritten and funded by some of the largest corporations of Earth, and their functional rule of the colonies are enshrined in the initial Colonial Compact agreed upon by these investors.  In the centuries since Whistler‘s founding, The Council is still composed almost entirely of representatives of those corporations with the addition of an elected Minister and an elected representative from the various labor unions of The Reach.

In the centuries since the end of the “establishment phase” of colonization, several statutes have been passed that prevent the Council corps from maintaining monopolistic control of commerce, and in most cases the divisions of the major corporations that sit on the council are fairly far removed from the day-to-day operations and strategic vision of their respective companies.  Still, The Reach remains unabashedly a Corporate Oligarchy.

The Council is composed of the following representatives:

The Bureau is the dedicated internal security arm of The Council.  It is chartered with investigations, espionage and counter-espeionage, and the security of The Council and the entire governmental bureaucracy.  The Bureau enjoys jurisdictional priviledge anywhere in Council-controlled space, and can even override the military when acting on explicit remit from The Council.

Known colloquially as the Scout Service, the Whistler Exploration Corps is one of the oldest of The Council‘s agencies.  The Scout Service’s initial charter was to survey the systems of The Reach, a responsibility that has become somewhat moot in the age of the jump drive.  While the Scout Service does dispatch and manage long-range jump probes that are reaching into the neighboring sectors of space, their primary responsibility has evolved into a more thorough exploration of the hostile planetary environments of the colonies.

The ESF manages the day-to-day law enforcement operations on Eriksson Station over Whistler, as well as the new orbital elevator down to the capital city of Skyward.

Trinity Station is a massive orbital city and shipyards orbiting the gas giant Yang in the outer Whistler system.  It is managed by a local Director, democratically elected by the station’s registered permanent residents.

Founded in Wy330 by colonists escaping the siege of Demeter, The Holy People’s Republic of Jericho is the only human colony in The Reach that The Council recognizes as a sovereign nation – occupying a handful of systems on the other side of a 30-light-year gulf from Whistler.  The colony was able to get a foothold rapidly on the terrestrial planet Jericho for decades before the people of Whistler ever became aware the colony was there.  The Republic of Jericho is ruled by a democratically-elected Senate and chaired by a Prime Minister, who also acts as the head of the Church of Jericho, a state-sponsored polytheistic faith that fervently preaches The Reach was, at least in part, created and populated by ancient aliens.  Much like the people of Demeter, Jericho enjoys a technological advantage over Whistler in nearly every respect – though in the age of the jump drive, espionage is leveling the playing field.

The Demeter Summit is the small council of intelligentsia who manage the affairs of the moon Demeter.  It is no secret that Demeter is essentially a state of the Republic of Jericho, but the illusion of independence is maintained for the legal detente with The Council.  The moon is orbited by a WDF Naval anchorage and extremely strict controls are placed on the movements of people and goods in and out of the moon.  Strictly speaking, trade between Demeter and the worlds of Jericho is forbidden, but the flow seems to overcome the blockade at levels that shouldn’t be possible.

Founded in Wy250, the Republic of Grove is the oldest human colony outside of Whistler.  The colony was astoundingly successful due to the rich fruits of the Grove system and grew into the billions in subsequent centuries.  The six year sleeper trip from Whistler allowed the colony to socially evolve independent from its parent state, causing the inevitable rebellion when The Council attempted to reassert control after the creation of the jump drive.  The people of Grove knew a war was inevitable and had built a formidable navy that the WDF was ill-prepared for.  It took nearly forty years for the Unification Wars to end.  The back of the Republic was finally broken in 590 after Jack Cartwright crashed the WDF Indomitable into the Cheyenne Drive Yards and Colonel Cara Burton’s Marines took the capital city of Laurel.  The battle marked the first deliberate targeting of a manufacturing base in wartime since the colony’s founding, shattering a sacred taboo.  The subsequent twelve years of occupation sent the former government into hiding, emerging as the Grove Liberation Army.  In Wy602 they overthrew the provisional government installed by The Council with overwhelming public support and are attempting to negotiate sovereignty.

While the people of Foxglove didn’t have the navy to stand up to the WDF, what they did have was a fierce, independent spirit and ready access to a manufacturing base for small arms.  The former Foxglove Colonial Congress has gone underground to form the Foxglove Liberation Party, which operates a seemingly endless supply of insurgent cells.  Over the decades, the FLP remains in nominal control of Foxglove, even with provisional government operated by The Council and the WDF Navy in the skies.  It is extremely dangerous to attempt to do business on Foxglove without the FLP’s explicit blessing.