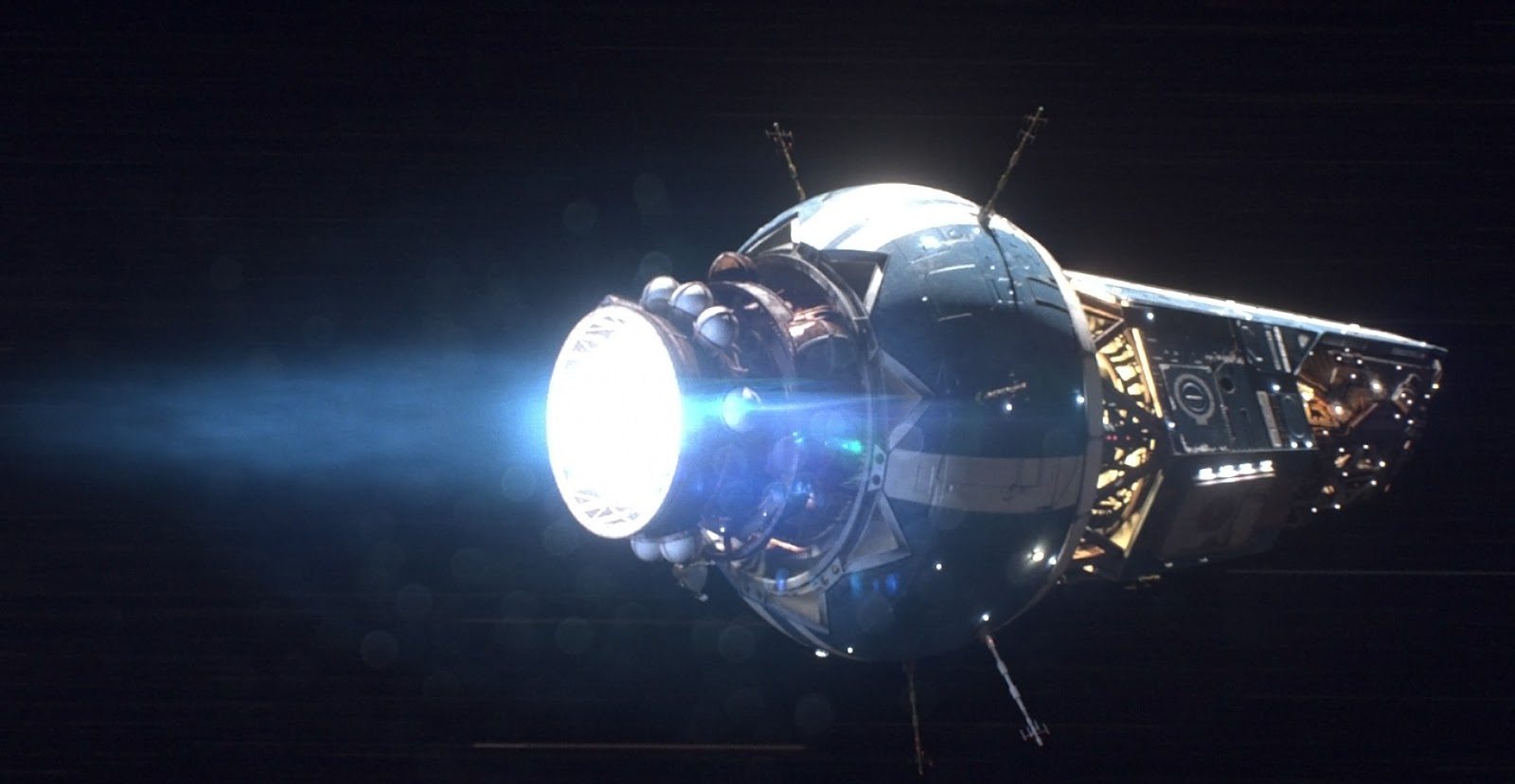 Korolev Drive ships are developed with one or more drive cones in the aft of the craft and habitation layered “above” perpendicular to the direction of thrust to provide crews with consistent g-forces during acceleration and deceleration burns.

Maneuvering is typically provided by numerous cold-gas thrusters that can, in some military craft, alter a craft’s attitude at 10Gs or greater.

Craft small and hardy enough to land in gravity wells have additional traditional pre-Korolev hydrazine thrusters to stabilize takeoff and landing.  Standards for cone and strut depth have been established to ease cargo and passenger transfer at ground-based spaceports.

Hull geometry varies widely, especially in craft that are never expected to experience significant g-forces.  However, for vessels designed to achieve orbit from the ground, physics dictates a somewhat aerodynamic rocket shape.  For the most part, ground to space transit is facilitated by near-orbital shuttles purpose-built for efficiency in atmosphere.

Due to the commoditization of cryogenics, the technology is prolific in space travel.  Everything from indefinitely-preserved fresh foods to cryogenically-suspended fuel pellets for Korolev drives is driven by the preservation tech.  But nothing is more ubiquitous than the NewCryo-AutoDoc Personnel Stasis Chamber.

The CryoPod benefits from six centuries of necessity and heritage and is a wonder of efficiency.  Able to sustain a human in suspended animation effectively indefinitely, each CryoPod possesses its own cartridge of “up” and “under” medicines, net-connected expert system, and emergency battery.  They are shielded against a huge number of threats and they are six-sigma safe.  In an emergency a person can put themselves under and have the system bring them back up again on a trigger – though it’s not advised to do so without medical oversight, as bypassing the initial anesthesia makes the process agonizing.

Nearly all Korolev-capable ships have a number of CryoPods equal to their rated crew complement.  They are indispensable as life-pods in the case of a catastrophic failure, and in the centuries prior to the jump drive they were a necessity for interstellar travel.  These lifeboats have also become a source of supplementary income for ship owners, offering inexpensive passage for non-discerning passengers.  There have been more than zero cases of frozen passengers being dumped for the sake of saving the crew in disasters.  (And most low-passage contracts possess this clause in the fine print.)

Crew and passenger accommodations vary greatly with ship type, but many things are consistent, regardless of shared bunkrooms or staterooms.  In all but the most luxurious VIP staterooms, bunks are designed mostly enclosed to nominally protect a passenger in the case of sudden acceleration or attitude change, but they’re not remotely as safe as a g-couch.  Bathing is typically performed in enclosed booths and primarily steam to preserve water.

Magnetic boots are not uncommon, but most career spacers consider them crutches for the uninitiated.  Additionally, it is extremely uncommon for ships to have windows anywhere but in airlocks.

Galleys are universally designed for quick-serve food preparation, heavily utilizing enclosed multi-function grill/oven/microwaves.  Stoves, hotplates, and other culinary tools are extremely rare.  Like all systems on a ship, everything is designed to minimize disruption in zero-g or high-g maneuvers.

The standard g-couch began as another AutoDoc product but has been innovated on by countless suppliers.  They are ergonomically-designed to support a person in high-g maneuvers, adjusting position, pitch, recline, and cushion density in milliseconds in response to maneuvering commands from the pilot expert system.  Military and racing models include miniature AutoDoc systems that can administer a cocktail of counter-g therapeutics to help prevent hemorrhaging in critical crew.  Unsurprisingly, due to the specialized nature of these devices, very young children and very large people require special couches.  Most career spacers have their couches custom-tailored – such customization vastly increases their  effectiveness.  Not being properly strapped into a g-couch during sustained high-g maneuvering is essentially a death-sentence.

The majority of ship systems are designed like every other computing environment.  Displays are mostly holographic where convenient or flat surfaces where not.  Most ship systems employ a redundant combination of gesture and physical controls, and g-couches at ship stations all have mico-gesture sensors in their hand rests, allowing users to retain control even under extreme forces.

Starship maneuvering is almost always performed via pre-programmed instruction sets passed on to the pilot expert system or, occasionally, the shipwide AI.  Fine control and emergency maneuvering can be performed manually by the pilot, but in nearly every case outside of an emergency, this task is more akin to plotting a course than manipulating a flight stick.

Similarly in combat, as things in space move faster than humans can react and at greater distances than they can reasonably perceive, nearly all combat operations are performed by pre-set instructions sent to the fire control expert system.